THE HOLY SOUL WHO ASKED ME FOR PRAYER 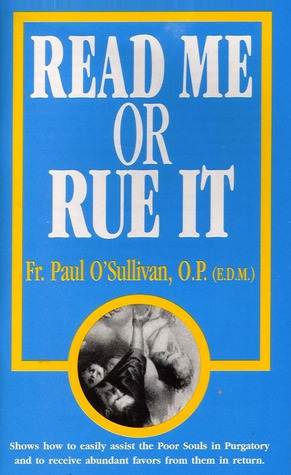 When I was a teenager in Cork City, Ireland, one rainy winter's day I met an eccentric woman who confronted me as to whether I ever prayed for the souls in Purgatory. I was taken aback at the suddenness of her question, and I replied that no I didn't. I reasoned that if these souls were in Purgatory they must have hurt other people badly and deserved their time there. She looked at me with flashing beady-eyes and told me I lacked charity, why would I think of their bad deeds, and not of how I could help them? She instructed me that most saved people go to Purgatory before going to Heaven, and would I not read a pamphlet entitled, Read Me Or Rue It, and learn that, "The poor things suffer so much". Once she had found out I had the money for such a book and gotten me to agree to pray for the poor, poor souls, she intimated she was hungry and I paid for her lunch.

I asked her if she had read Read Me Or Rue It. She said no, which caused me to regret that I'd asked her because she had intellectual difficulties and didn't read a lot. She wasn't slow, but she had carefully hidden shortcomings. But boy, did she have the gift of the gab and an ability to read people and she knew exactly how to play their emotions for what effect. She was one of the local characters who I met on my travels around the city who was always up in everyone else's business while keeping her own cards very close to her chest, and she knew which churches to go to where she would meet an Irish American tourist who would be enthralled that she was "full of Blarney" and then buy her a sandwich. She wasn't homeless, but what one might call, a discreet beggar. I was fascinated that she knew the other shuffling souls around Cork who were just like her who could play someone for a few quid, and they knew her, and they kept a studied distance from each other.

Anyway on the woman's recommendation, I read Read Me Or Rue It, and it inspired in me a willingness to do anything, anytime for the Holy Souls. Some years later I was spending some time in Spain doing a bit of teaching. One day the hot sun shone on me as I went from beautiful church to beautiful church and said a few prayers. Suddenly, I saw in my mind's eye a mental image of a very old Irishwoman dressed in old-fashioned, grey and purple hand-made clothes. Her frozen face made a deep impression on me, like it was inside an ice cube. She told me that she had died recently and that she was a relative of the woman who I helped out. "This is my Purgatory. Please pray for me and ask my relative to pray for me," she said. I was confused because this woman seemed like her body was in a deep freeze and wasn't Purgatory always a raging furnace? And couldn't this just be my imagination? But, no, the image of the woman persisted, and she even told me her name.

I decided to call the woman, who the old woman in Purgatory said was her relative, and find out. I figured the worst that could happen would be she would call me crazy, and anyway she had been the one who exhorted me to pray for the Holy Souls in the first place. I called her and at first she wouldn't give me any direct answers. So I said the name of the relative and described her face and clothes to the last detail. She gasped and conceded that this relative had died recently.  She really had not wanted to tell me of the old woman's death, because she may have gotten some inheritance (her family were much more well off than her shabby clothes suggested) and were this to be known it would have conflicted with her way of leaning on me and others for footing her bills in hotels and restaurants. When it was established that the old woman was her dead relative, she admitted that she hadn't prayed for her because when she was alive the old woman had been in the habit of making her feel stupid. Her late relative had been a very brilliant student, a fluent Gaelic speaker and she had effortlessly gotten her education while her younger relative had failed and failed, only scraping a college degree in the end.

I passed on the request the old woman had made for prayer, and I was met with reluctant sighs and she made a vague commitment to pray. I didn't press her because the old woman had hurt her. I thought of giving the woman money for a Mass stipend, but didn't know if the money would be used for, *coughs*, other things. Later I found out that the woman did pray for her dead relative on two occasions and she lit two candles, albeit she prayed with heavy unwillingness. I had no issues with the old woman, and so on the second and final time she appeared in my mind's eye, I gave my heart to praying as much as I could for her, asking Our Lord that she be released totally. If she were to appear again, I would pray once more, but if she were not to appear I would take it as a sign she was released from the prison of ice, such as St Frances of Rome was shown. She didn't re-appear.

But the irony is irresistible: as a callow teen I had not wanted to pray for the poor souls because in my vindictive way I felt that if they hurt other people while alive they deserved their lot, but the same woman who persuaded me and chided me for my lack of charity felt very loathe to pray for the soul of a relative who had hurt her.

I am comforted by the circle of charity, that the same woman who instructed me in devotion to the Holy Souls surely did a work of mercy by informing me of the holy souls' great suffering, that I prayed for her relative when she found it so very hard, and in my small way I'm making known the pains of the Holy Souls and advocating for others to come to their aid. 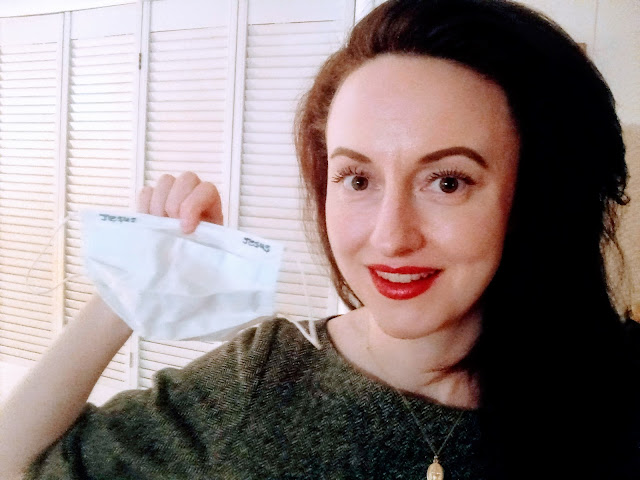 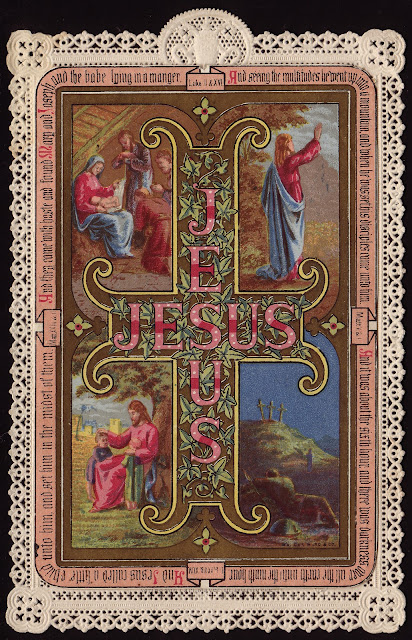