ST MAGDALEN DE PAZZI MADE 107 COMMUNIONS TO FREE HER BROTHER

St Magdalen de Pazzi was born in Renaissance Florence. Her family - the de Pazzis - were especially wealthy and influential nobles.  As a young woman of 16, she was a Titian haired beauty with lively auburn hair, and her portrait was duly commissioned. When it came time for her to marry, she refused the hand a nobleman of some rank, and opted instead to honor her vow to remain a virgin which she had made when she was only 10. After she became a Carmelite nun, she was given many detailed views into Purgatory. After her brother died, she was met with a vision of him in Purgatory. This same brother had been deaf to her during his life and such was his torture in Purgatory that when she saw him, tears flowed down her face and she called out to him, "Oh, afflicted soul, how terrible are your pains! Why are they not understood by those who lack the courage to carry their cross here below? Whilst you were still in this world, my dear brother, you would not listen to me, and now you desire so ardently that I should hear you. Poor victim! What do you require of me?" Her brother begged her to make 107 Holy Communions on his behalf. Magdalen agreed wholeheartedly, "Yes, I can easily do what you ask, but, alas! What a length of time it will take me to pay that debt! Oh, if God permitted, how willingly would I go where you are, to deliver you, or to prevent others from descending into it." St Magdalen made the 107 Communions for her brother and he was freed.

Different Holy Souls have different needs to be met so they may be delivered. In this case, Magdalen's deceased brother, Signore de Pazzi, needed her to receive Holy Communion for his intentions, while in the case of Eugenie Wybo, she needed Holy Masses offered for her.

There is an uncommonly well-written biography of Magdalen by Father Virgilio Cepari, which is the text I have used. As an aside, St Magdalen's feast day is May 25th, the birthday of Padre Pio. 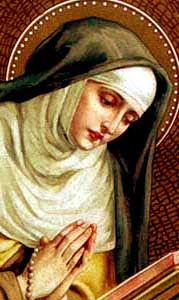