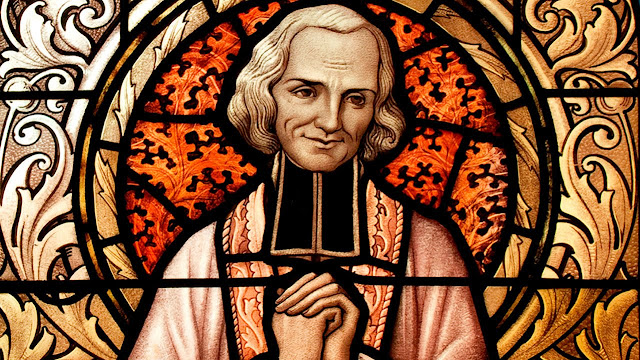 France, 1880.  A devout lady lost her husband and was in the throes of painful grief. She had loved him very much and said of him, "I had a husband who was kind and affectionate, and who, although otherwise leading an irreproachable life, entirely neglected the practice of his religion." She had prayed a great deal for him, but in truth she conceded, "My prayers and exhortations remained without effect." The May before he died she made an altar to the Blessed Virgin in the bedroom, as she did every year, and bedecked it with blossoms. Her husband had to spend Sunday à la campagne and whilst there he picked fresh flowers and brought them back especially so his wife might adorn the altar with these bouquets and better venerate Our Lady. He never failed to bring these bouquets.

In June, however, he suffered sudden death. His widow was in deep mourning, "I was inconsolable, especially as I saw all my hopes of his return to God vanish. In consequence of my grief, my health became completely shattered." Her family urged her to take a sojourn in the South of France, where she could recover. When she was there and passing through Lyons, she took the opportunity to visit the Curé of Ars. Ahead of time she wrote to the Curé of Ars and asked him for an appointment. She told the Curé that her husband had died, and she invited his prayers for him, but she told him absolutely nothing else, and did not mention the fact of his completely laxity in practice of the Faith. 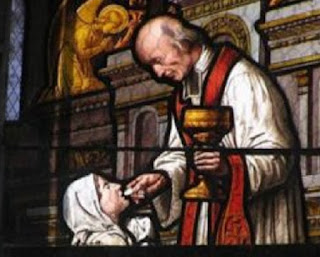 When she arrived in Ars, she had only just entered the blessed Curé's room when he edified her, "Madame, you are disconsolate, but have you forgotten those bouquets of flowers which were brought to you each Sunday of the month of May?" The lady was astonished - she had not mentioned to anyone the posies brought to her - because the altar had been in the private bedroom. The Curé spoke on, "God has had mercy on him who honored His Holy Mother. At the moment of his death your husband repented, his soul is in Purgatory, our prayers and good works will obtain his deliverance."

This account was published in a Catholic digest, Petit Messager du Coeur de Marie,  November 1880. There has been a distinct French theme in this post and my last post on Blessed Catherine, which has not been intentional, I picked these accounts because they demonstrate the power of the Blessed Virgin's intercession. When Mary-the-miscreant called upon the Blessed Virgin and placed her cause into the Queen of Heaven's hands, Our Lady obtained for her the grace of perfect contrition. As we see in the case above, it so pleased Our Lord that this irreligious man was so diligent in picking nosegays for his wife to decorate the May altar that Our Lord had mercy on his soul.

These pieces of writing have been a type of preparation for a post (which I'm currently researching) devoted to the relationship Our Lady has with the Holy Souls. God willing, I hope to post it on Saturday, the day of the week devoted to Our Lady. Our saints and mystics have revealed that it is on Saturday Our Lady goes down to Purgatory accompanied by a host of angels who act as a loyal staff of servants. She points out certain souls who the angels carry to Heaven.
Email Post
Labels: Curé of Ars France French Catholicism Holy Souls in Purgatory November month of the Holy Souls Prayer for the Holy Souls Purgatory Purgatory Sojourn of Hope the Blessed Virgin and the Holy Souls