MARY, THE SOUL EVERYONE PRESUMED HAD GONE TO HELL 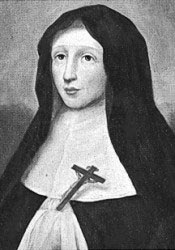 Blessed Catherine of St Augustine was a French nun. At the tender age of 16 she left France for Québec where she was a nursing sister. In the neighborhood where she lived, there was a woman called Mary who was more than a bit of a miscreant. Mary had given herself up to all vices, and she soured even more with age. Perhaps she was a disorderly drunk and promiscuous, or even adulterous, it is not known for sure. But the people around her grew so tired of the trouble she caused them that the threw her out of the community. She was forced to make a home for herself out of a grotto in a forest. A few months passed, Mary died alone without the Last Rites.

Blessed Catherine heard of Mary's sad death, and decided to neglect praying for her, because she presumed this trouble-maker was surely lost for all eternity. In this, Blessed broke with her pious habit of recommending to God everyone she knew who had passed on.

Some 4 months later, Blessed Catherine heard a voice, "Catherine, how unfortunate I am! You recommend to God the souls of all, I am the only one upon whom you take no pity." Blessed Catherine asked who was talking to her and she heard, "I am poor Mary, who died in the grotto." Blessed Catherine was flabbergasted, "What! Mary are you saved?" She got the happy response, "Yes, by the Divine Mercy I am. At the point of death, terrified by the remembrance of my crimes, and seeing myself abandoned by all, I called upon the Blessed Virgin. In her tender goodness she heard me, and obtained for me the grace of perfect contrition, with a desire of confessing, had it been in my power to do so. I thus recovered the grace of God and escaped Hell. But I was obliged to go to Purgatory, where I suffer terribly. My time will be shortened, and I shall soon be liberated, if a few Masses are offered for me. Oh, have them celebrated for me, dear sister, and I shall ever remember you before Jesus and Mary." Blessed Catherine rushed to honor this request, and had Masses offered for Mary. Just a few days later, the soul of Mary appeared, like a dazzling star, and she gave profuse thanks to Blessed Catherine.