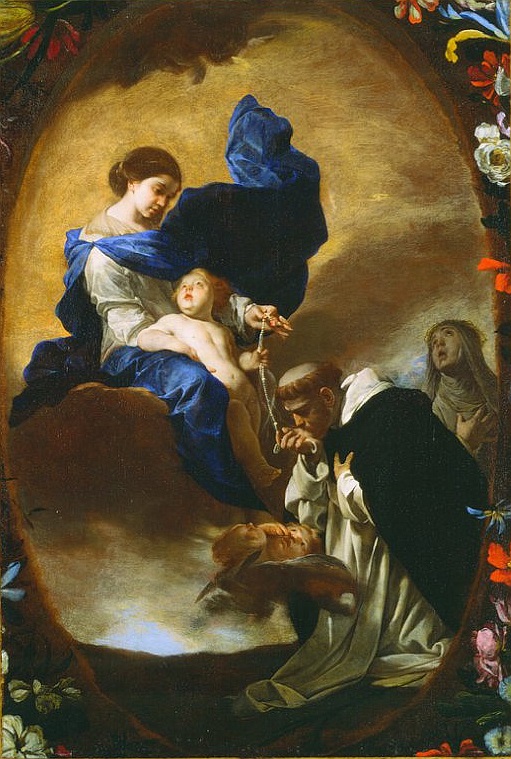 Dominic Guzman was a young Spanish man from a noble family who found himself in France and in the middle of a hot mess of trouble. It was the early 1200s and the Albigensian heresy was raging among the French. The Albigensians were given to the deadly dissidence that the flesh was evil but the soul was good and that a person's body was a wicked prison of meat and bone that incarcerated the pure spirit.

The communities of Albigensians were often morgues, they starved and drank themselves to death so as to be done with the total corruption of their bodies. The leading Albigensian teachers strove to indoctrinate others as to this perilous lie; that Jesus Christ had not been flesh and blood, because the Savior could never have taken on a real body because that would have been to cloak his soul in evil flesh.

St Dominic went among these people and tried to pick out the thorn of heresy from their hearts. But he knew a lot of failure. There came a time when he needed to retreat. He sequestered himself in a forest for 3 days of prayer, fasting and discernment.

After the 3rd day, 3 angels appeared with a ball of fire before them. These angels heralded an apparition of Our Lady. The Queen of Heaven appeared to Dominic and instructed him that to overcome the Albigensians, he had better preach and teach an evolved form of "the Psalter". "The Marian Psalter" was a method of prayer that had developed over the ages; it comprised of 150 Hail Marys divided into sets of 15, with 10 Hail Mary's per set. An Our Father was said before every set of 10 Hail Marys.

That most special day in the forest in France, when Our Lady commanded Dominic to spread her Psalter, she attached a mystery to each set of 10 Hail Mary's, and these were the Joyful, Sorrowful and Glorious mysteries of the Rosary. The mysteries concerned Christ's birth, death and resurrection of His Body, which were like rebuttals in prayer to the Albigensian fallacy that Christ had never become Flesh. Dominic attracted young men and women to his fledgling religious order, who became the Dominicans and who did as Our Lady commanded their founder, they preached the Rosary.

Dominic was given the awesome privilege of receiving the Most Holy Rosary in the 13th Century - not an accident - Our Lady marks her presence with the number 13. But in the 14th century, Dominic had a great role in the mystical life of St Catherine of Siena who was a 3rd Order Dominican. Dominic was there when Catherine had her mystical marriage to Christ. And in one spectacular revelation, God the Father divulged the sublime secrets of Dominic's soul to Catherine.

First Catherine was given an awesome vision. She saw the Eternal Father generating from His mouth, His Son, Jesus Christ, who appeared to her in His human nature. Then she beheld St Dominic emanate from the breast of God the Father. Dominic was bathed in the most brilliant light, and of Jesus Christ and Dominic, God the Father said, "Sweetest daughter, I generated these two sons, one according to nature, the other by adoption in love and gentleness."

God the Father honored His "adopted" son Dominic so highly that He told Catherine that all Dominic's works mirrored Christ, "I tell you that in almost all his works he resembled my natural Son...Just as this natural Son, the eternal Word of my mouth, preached to the world the things I commanded Him to preach and gave testimony to the truth, my adopted son Dominic preached the Truth of my words to the world, to both Catholics and heretics, and not only by himself but also through others."

When Dominic had knelt in the brown earth of the forest floor and implored the Almighty to give him what he needed to save the Albigensians from themselves and lead them to salvation, our Father in Heaven sent our Blessed Mother to give Dominic the Rosary. Dominic gave his all to spreading the Rosary, and if all Dominic's works resembled Christ's works, then preaching the Rosary is alike unto Christ.

This post was informed by Raymond of Capua's biography of Catherine of Siena.

The classic painting accompanying this post is of St Dominic receiving the Rosary from Our Lady's hands with Catherine of Siena in the background, fainting in ecstasy. It was executed by Bernardo Cavallino.