TO BURN THE NAME OF JESUS ON ONE'S BREAST

To think St Jane Frances de Chantal loved the Holy Name so much that she took a blazing hot iron and wrote the name "Jesus" on her breast, til It was there in burnt red skin, a series of letters resembling red ribbons. She inflicted this wound so her body would bear the Holy Name.

Blessed Henry Suso ached with love of Jesus and one day in his cell, he pushed aside his brown scapular and took a pointed metal instrument, a style in fact, and imprinted the Name of Jesus on his chest so that when the wound healed the letters would remain as deep scars. After tearing his skin into the letters "Jesus", Henry sighed, "Ah, my Lord! My heart and soul's only love...Lord I cannot imprint Thee any deeper in myself, but do Thou O Lord, I beseech Thee, complete the work." 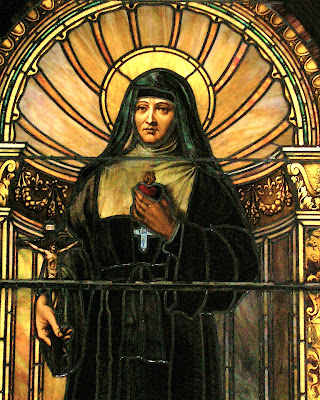 Had Jane Frances or Henry lived today and had they imprinted themselves in a way that looked like self-harm, they would be sectioned and the medics in white coats would not let them out of the mental ward until they promised never to rent or burn their skin again. At best they would be called extreme, and at worst they would be called crazies. Yet, Jane Frances was no lunatic, she and St Francis de Sales founded the Order of the Visitation, which became a flourishing order that attracted many different women into religious life and would later be the home of St Margaret Mary. To be fair Frances de Sales had to talk Jane Francis out of harsh mortifications that she had wanted to impose on herself (this from a man who tied himself to trees). Blessed Henry had a famously gregarious personality, he drew people to him who loved being in his company and enjoyed his rapier wit and lively intelligence (and perhaps the sight of his unruly tonsure, sheep hair in a circlet). He was not a morbid obsessive who repelled people.

I do not for one moment suggest we think about doing as Jane Frances or Henry did, I, for one would never do such a thing. But I think their high moments of heroic demonstrative love for the Holy Name may serve for us as a meditation on the great love Jane Frances and Henry had for the Holy Name. This love certainly puts to shame the love many of us have for the Lord. To contemplate their love is to know our lack of love which need not instill self-hate but a humbling self-knowledge and hopefully a realization that despite our lack of love, the Divine Love is such that Our Lord came into the world as a vulnerable Infant.

In these very last days of Advent, we need allow ourselves to be challenged by the love Jane Frances and Henry had for Jesus that they suffered their skin to be scorched or incised so they could bear the Savior's Name. Those of us who do not want to mark our bodies, or cause ourselves pain, may nonetheless ask ourselves if we will endure pain to our senses when we counter blasphemy, we do not injure ourselves but do we lend legitimacy to injury to the Holy Name by allowing the Holy Name to be blasphemed in our hearing?
Email Post
Labels: Advent Advent 2019 Blessed Henry Suso Counter Blasphemy Imprinting Jesus on the body Love of Christ St Francis de Sales and the Holy Name St Jane Frances de Chantal the Divine Love