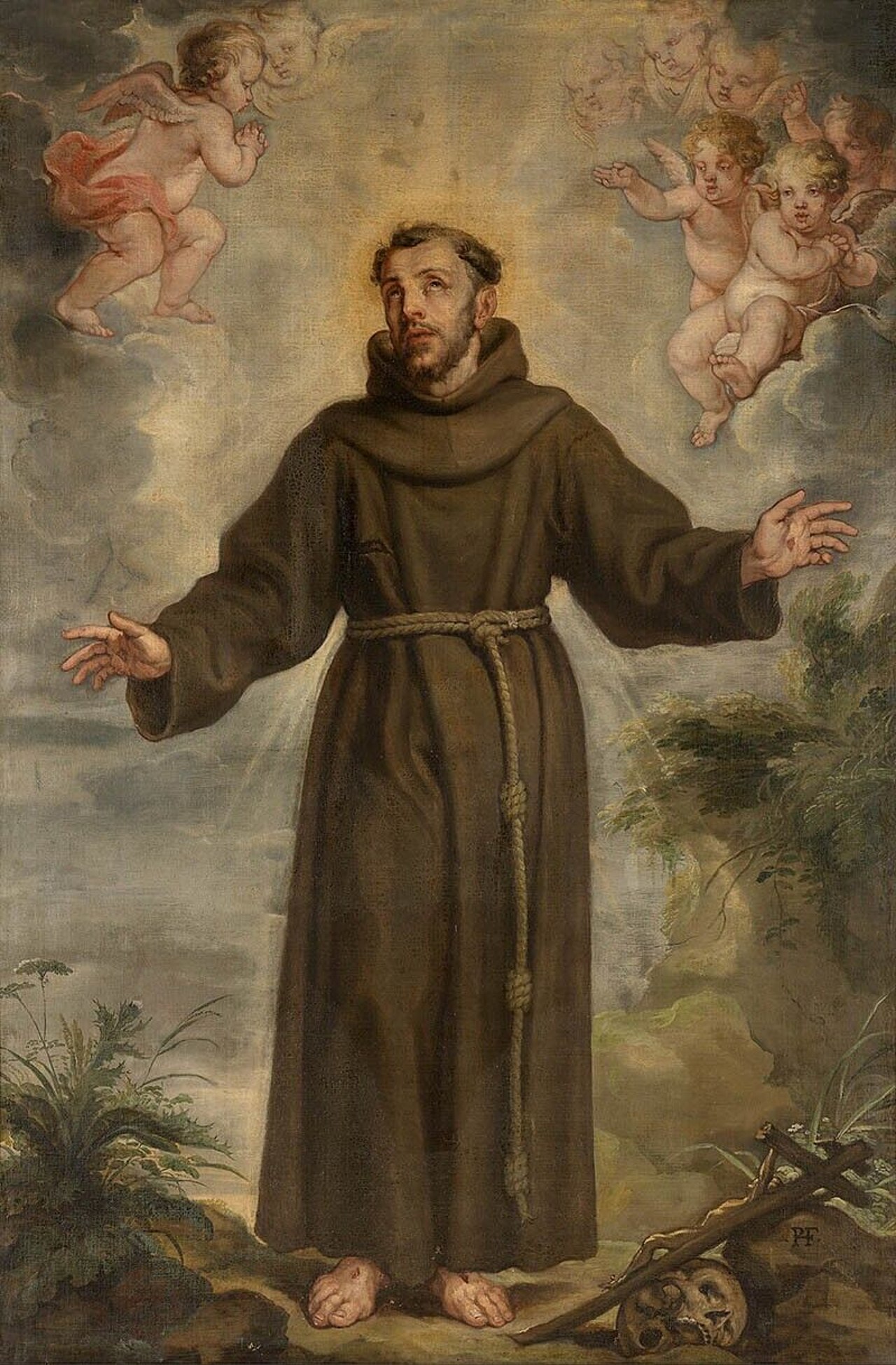 St Gertrude is famous because she saw the Who's Who of Heaven. Our Lord gave her visions of the higher and lower places of the population of Heaven with explanations as to why they had earned that spot. When Gertrude asked as to St Francis, she was shown him as a glorified soul in Heaven; arrayed in roses and with a kingly scepter in his hand.

She was shown that while Francis is "equal" in merit to St Augustine, there is one difference: Francis has "special rewards" given to him because of his "profound humility". Francis died in 1226 - only 30 years before Gertrude was born and was not a contemporary of hers, but a close forerunner. In merely 4 years time, we will observe the 800th anniversary of Francis' death.

Francis went to Heaven so very long ago, but his humility still fascinates, and I'd like to share some of the mortifications to which he subjected himself, the ways he had of humbling himself.

Francis rarely allowed himself to eat cooked dishes, but when he did eat them, he first dusted the dish with so much ash that it lost its original taste. Or, he splashed so much water on the food that it had no flavor. When he had a craving for a certain food and he gave into it, and ate it, he would abstain from that food afterwards. There was a time when he was so sick that he ate some chicken, but when he was well, he had a brother tie a rope around his neck and drag him through the city of Assisi like he was a criminal, all the while the brother bellowed, "Behold the glutton who has grown fat on the meat of chickens which he ate without your knowing about it." The brother's shouting and protesting as to Francis's gluttony attracted a crowd and not a few there were upbraided as to their own slavery to their stomachs and drunkenness, and they strove to eat and drink less.

As for sleep, he often slept sitting up, and when he allowed himself to sleep lying down, he used a stone or a piece of wood upon which to rest his head.

He lowered himself in the eyes of others. When he was preaching, he gave precise accounts of his sins. Furthermore when he thought badly of someone, he went to them and told them of his bad thought and then begged their forgiveness. This had the consequence of humbling the other person because they learned that Francis had perceived them negatively, and they may have been more inclined to dislike Francis as a result, yet he had shown himself a sinner who had wronged them in his mind when he implored them to forgive him.

Francis's biographer, Thomas Celano wrote of him, "He alone considered himself the most vile among men, he alone despised himself most severely." Francis's contempt of himself was increasing even as he was regarded more and more highly in Italy of the 13th century, and in equal measure to the flattery he received, he sought to be insulted. He said the kind words he received were, "lies" and he used ask one of the brothers to do hurl invective at him. In obedience to Francis a brother would call him "worthless" and "a boor" among other things. When Francis had had his fill of offense, he would tell the brother, "May the Lord bless you, for you have spoken most truly." Celano comments further that Francis, "fled admiration in every way."

His humility, however, shone ever so brightly in the miracles he worked. Francis never allowed people to think the healing power came from him, rather he worked miracles in so discrete and silent a way that they were all the more aware of the power of Christ. When a blind lady approached him that he might intercede for her to see, Francis did not rely on himself, but he traced the sign of the cross upon her eyes and immediately she could see. There was a wife and mother who came to Francis and showed him her crippled hands. She could do nothing with them. Francis stayed silent, but he touched her hands and they were instantly healed. The mother ran home, made a fine cheese cake and presented it to Francis as a gift. Instead of declining it and making a spectacle of himself as the person who was so strong he could refuse a delicious cake, Francis enjoyed a slice and then commanded the woman to take it home for her family to enjoy.

A very happy feast of St Francis to you and yours!

You may like to pray the litany to St Francis.

This post was informed by The Revelations of St Gertrude the Great which is available at The Spirit Daily bookstore.  And also, Thomas Celano's biography of St Francis.

The classic painting of St Francis was executed by Philip Fruytiers.