She who would become Sr Mary of St Peter was born in France in the year 1816. Her parents named her Perrine. They were a relatively affluent family of Britons and Perrine was raised in comfort. When she was a baby, both she and her mother were in bad health. Her mother was too weak to breast-feed Perrine, so she gave her to the care of a wet nurse who nursed little Perrine in her home. One day an unfortunate accident happened. The wet nurse left the house for a spell, and one of her children thought Perrine was cold, so she lifted her out of her cot and took her to the fireside, but dropped her and the flames seared one of Perrine's cheeks.

A few years later when Perrine was still a little child, her wet nurse paid her a visit but instead of being kind and forgiving, Perrine reacted towards her old nurse with bold vindictiveness and snapped at her, "So, you have already burned one of my cheeks and do you come here today to scorch the other?" The poor wet nurse was very upset and guilt ridden, and left the house of Perrine promptly.  This vignette tells us that while Perrine had a strong personality, she was not especially generous of spirit, and she was possessed of resentfulness, because while the nurse made a mistake which meant Perrine's cheek was disfigured, years after she had not come to her home to injure her.

There were no signs of saintliness in Perrine's young childhood. She was very jealous of her older sister, in particular Perrine begrudged her sister her place as the eldest. Her father was so hurt by something she did that to punish her he said cruelly, "Ah, this little girl is surely not our own. I think that she must have been exchanged in the nursery, for it is not possible that a child of ours could be as bad as this little one." Later Perrine said that her nastiness (which she did not describe) merited her father's put down.  Small acts of charity revolted Perrine, and when she saw a destitute, blind man having great trouble crossing the road, she resisted helping him because, "the very thought seemed repugnant to me." But she had a victory over herself when she forced herself to lend the blind man a hand as he crossed the road so that he would not be flattened by a horse-drawn carriage.

Perrine was not naturally prayerful and she had to coerce herself to grow in piety and goodness. So great was the strength she had to develop to turn from her old self that her character was muscular. All the while, she was always admirably honest and pointedly frank. She sincerely discerned the call from Our Lord to religious life, and found out she was destined to be a Carmelite nun. When she entered Carmel, her name was changed to Sr Mary of St Peter.

Our Lord chose Sr Mary as His chosen instrument, the one who would give the devotion to His Holy Face to the world.  She was 37 years old when Our Lord unveiled sacred secrets to her and entrusted her with prayers and promises. Jesus did not flatter her, and once He told her that she was chosen because she was, "puny" as a soul, but she had a strong mind and heart which was needed so He could give her weighty truths which she passed onto humanity at large.

Just before Sr Mary was given The Golden Arrow, the most dreadful storm of August 1843 tore through France, and the tempest made Sr Mary conscious of God's wrath, "I felt the justice of an angry God as I had never before felt it in my life." In prayer she besought Our Lord to tell her why she had felt so much the anger of His Eternal Father in the aftermath of the storm, and Our Lord answered her swiftly with, "My Name is everywhere blasphemed! There are even children who blaspheme!" Our Lord made known to Sr Mary God the Father's outrage that His Son's Holy Name was profaned was expressed in the cruel storm.

Sr Mary then understood blasphemy as when, "the sinner curses Him to His Face".  Thus blasphemy is the evil opposite of honoring Jesus's Holy Face. Yet Our Lord gave Sr Mary a vision of how the horrid sin of blasphemy is like a poisoned arrow that constantly wounds His Divine Heart. After this, He revealed to Sr Mary "The Golden Arrow", which is an Act of Praise that Our Lord dictated word by word to her which was to be said for the reparation of blasphemy against the Holy Name and in reparation for sinners tho curse Jesus to His Face. This most powerful prayer makes the plea that the, "Name of God be always praised, blessed, loved, adored and glorified", everywhere by every creature of God, which includes under the earth, which Sr Mary said also means the Holy Souls in Purgatory "where He is loved and glorified by His suffering souls." Our Lord and Sr Mary had a very pithy dialogue, devoid of saccharine sentiment.  Her blunt way of speaking meant her words had the sharpness of arrows, but this holy dialogue had a necessary precision, and from it we have the understanding that to dishonor Our Lord's Name is to curse Him to His Face and to shoot poisonous arrows into His Heart.

When Sr Mary had received The Golden Arrow in its entirety, Our Lord showed her His Most Sacred Heart which was wounded by The Golden Arrow and from His pierced Heart flowed torrents of graces for the conversion of sinners. If the poisoned arrow of blasphemy had caused torrential rain to issue from the sky as part of a storm, then The Golden Arrow causes the reverse, in the form of torrents of grace gushing from Our Lord's Heart for the conversion of sinners. You and I, at any time, may launch this arrow into the Divine Heart of Jesus, and enjoy the graces that cascade upon us and many other souls. 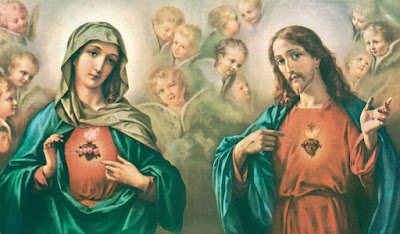 My source for the autobiography of Sr Mary of St Peter and the text of her revelations is the book, The Golden Arrow. 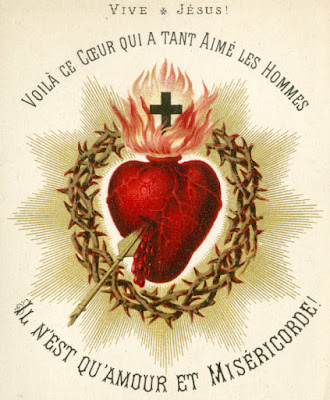 Email Post
Labels: Holy Name of Jesus How to honor the Holy Face reparation for blasphemy Sr Mary of St Peter The Golden Arrow Prayer the power of the Holy Name