I’m learning conversational Italian and what better way to get Italian on my ear then hearing the narration to this video!
Forgive the subtitles that are poorly translated into English. Padre Pio’s mother is described as ‘very believer’, which we may take to mean that she was devout.
According to this video – his mother took baby Francis (who would grow to be ‘Fr Pious’ or Padre Pio as the whole world knows him) to a ‘fortune teller’. Is this verifiable, or is the account exaggerated in this video production? When I typed in Padre Pio and ‘Giuseppe Faiella’, all the websites were in Italian.
A defining achievement of this video is gives a small feel of the atmosphere of the Italy where Padre Pio grew up.The video also talks about Pope Leo XIII, who was on the throne of Peter during Padre Pio’s childhood. Pope Leo, like the pope before him, was a ‘prisoner’ in the Vatican, which is absolutely correct in that Pope Leo was physically and politically a ‘prisoner’ of the Vatican. A short summary of Pope Leo XIII achievements is available here. 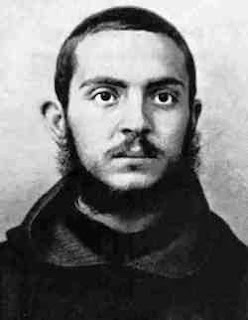 A lasting memory from watching this, is that during the early days of his religious vocation, Padre Pio was overcome when meditating on the Passion of Our Lord and that his tears would overflow and bathe the ground.
Email Post
Labels: 'prisoner' of the Vatican Book Padre Pio Giuseppe Faiella Passion of Our Lord Pope Leo XIII San Giovanni Rotondo spiritual children of Padre Pio