The deformed crucifix is the result of one person’s sin, the actual crucifixion was for the sins of all those who have ever lived, and all those yet to live. 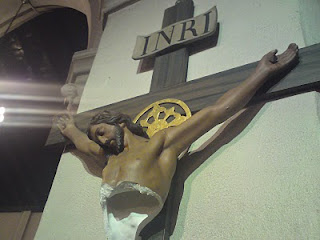 It was a blessing that I didn’t notice it before Mass. I walked past the ravaged crucifix without noticing a thing. Had I seen the battered crucifix before Mass, thoughts of how ‘they’ had done such wreck to the figure of Christ would have loomed about my brain during Mass, I would have imagined what implement ‘they’ used, a hammer? A mallet? Ordinary tools that were put to such violent uses when ‘they’ went into Corpus Christi Maiden Lane, and strategically did this. 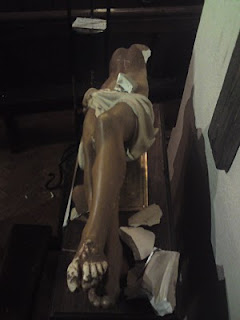 People who pray in the church may no doubt feel that bit threatened. When ‘they’ did this, it was a direct work of hatred for Christ, but also an indirect attack against all those in their father’s house. I may comment that there is something characteristically satanic about the way the crucifix was vandalised. ‘This is what we think of your saviour!’ Smash! ‘We are not content to let you worship in serenity. We will publically dishonour a crucifix.’  Shatter! ‘Oh, but you’re wasting your time, honouring this dying first century Jew, we’ll show you what’s best for this ornament of suffering!’ Crash as Our Lord’s legs fall to the ground. This is not just a random act of cruelty; if ‘they’ were indifferent, like the majority of the population, they would not spend their time in such a depraved exertion of spite.
‘They’ may not be entirely cognisant that it is the devil that they serve, nonetheless, they do his work. Our Lord was clear; either you are for me or against me.
I am certain, however, that good may come from this. No Catholic, lapsed or practising who sees this destruction can be complacent about how much ‘some’ hate the Catholic Church, and how much ‘some’ want to cheat us of a crucifix. The fragments of the crucifix, the broken ceramic body parts bring home to us the reality of malevolence, so too does it remind us that Our Lord paid the price of our iniquity.
After the 6.30PM Tridentine Latin Mass, members of the congregation gathered around the battered Christ, and some silently sobbed. One person was particularly touched, and questioned, ‘why did they do this to Our Lord?’ Conversely, and perhaps this reaction is the antithesis of what ‘they’ who attacked the crucifix wanted, but the sight of Our Lord torn, brought out a collective outpouring of grief, that informed each heart of the horror of Our Lord’s actual death on the cross. The deformed crucifix is the result of one person’s sin, the actual crucifixion was for the sins of all those who have ever lived, and all those yet to live.
Email Post
Labels: Corpus Christi Church Maiden Lane Tridentine Latin Mass 6.30PM