‘you’re terrible, how can you think such a thing...Jesus as judge...puh...you’re absolutely terrible.’

I do not dispute that for many people the integral Jewish setting in which Christianity was founded has become fantastical. A real-life Bible story that has no importance for our lives now, or for our future after death. People of all rank, from school kids who think that Jesus was a stone-age figure, to the nobility of this country.

I spoke with Baroness Warnock last year after she gave a lecture at University College Cork. The baroness, a former favourite of Mrs. Thatcher, was there to argue a case for experiments on human embryos. After her speech in defence of laboratory splicing of embryos, I asked her some questions about her Christian faith. 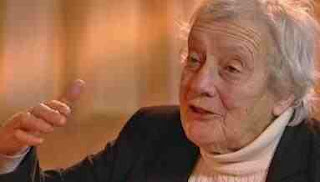 
'Hello Baroness'. Customary shaking of hands. Dreadfully false toothey smiling from yours truly. The baroness smiled at me in return.
'May I ask Baroness Warnock, you are a member of a Christian denomination.'
'Oh yes, indeed I am a Christian'
‘So, you unreservedly call yourself a member of the Christian faith?’
The baroness looked gamely at me, gave me a knowing nod and said 'Well yes. But my dear, Christianity is all part of a lovely fairytale, very little of it is factual. There's some morals that you can pick and choose from.' Perhaps I strayed from the rules of polite conduct for conversing with baronesses. But I asked, 'thank you for being so kind as to tell me that you are a...Christian. Yet my understanding Baroness is that Christians believe Jesus will be at the end of their lives a judge.'

The baroness's smile disappeared. I sighed, and felt like a TV evangelist. I pressed on and said ‘that He will render an account of our lives when we die. And should Our Lord find fault with your...enthusiasm...for experimenting on embryos...what will your response be?'

Baroness Warnock’s eyes loomed large and she said to me ‘you’re terrible, how can you think such a thing...Jesus as judge...puh...you’re absolutely terrible.’
I gave a shrug . My body language implied, ‘well there are a lot of loonies in this world, I’m just one of them, but since you say you are 'Christian' why do you not shy away from Our Lord’s role as king, who decides where a subject will go at the end of their days?’

I continued by overly-friendly overly-smiley routine and brightly said, ‘I do hope you have a nice trip back to England.’ What else could I say?