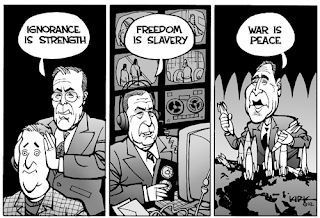 In Orwell’s 1984 society are forbidden from learning history but only the made-up ‘history’ that their totalitarian leaders think that they ought to know. Sound familiar?

Perhaps people accept our ‘over-powerful, over-regulating, social-worker state’ simply because they know no comparison; the past is a foreign country, literally! The learning of history has been down-graded in schools, British leaders spend their time apologising for ‘mistakes’ Britain made, instead of ever inviting their electorate to take pride in the country’s achievements, and the left show selective amnesia about the past. Were anyone to ask a GCSE student about the glorious role of Britain in World War II, they might not even know Britain fought in WWII. A slogan in 1984 was Ignorance is Strength.

No, the past is blackened to make theCCTV present look gleaming white. The mood is; ‘it was all so repressive in the past, things are much better now!’ It is a social faux-pas to ever claim that previous generations did somethings better than we do now.

Some believe Britain is in atonement for ‘sins’ of the past. Part of the penance is the welfare state, and research shows that on balance, the benefits are going to some groups in society more than others. But don’cha know these were the very people who ‘we’ wronged in the past. Fathers, priests or any patriarchal figure is a potential hate object, with schools having sanctioned lessons in the class room that teach children to be distrustful of their own dads. This is part of the ‘men were so bad in the past, that we must make them pay now’. It’s very pc for teachers to say ‘does your dad smoke? He’s a danger to you then!’ But then the absent and maligned father only perpetuates the welfare system. Then children are forbidden from seeing happy pictures of fathers and children from a previous age, say the 1950s, this is Labour’s ‘educational policy’. Ignorance is Strength?

I left the above as a comment on Ed West’s Daily Telegraph blog. Link -