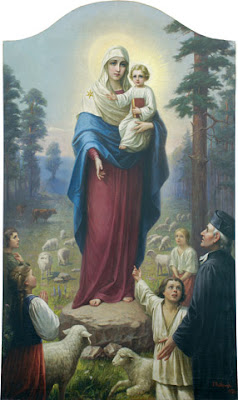 I am fascinated by the apparitions of Our Lady in the village of Siluva, Lithuania where she wept bitterly. Our Lady explained why her face was drenched in tears: the ground beneath her feet had once been a Catholic Church, but had been demolished by Calvinists, and since then was being used as a pasture for farm animals.
It was a Summer's day in the year 1608. A group of shepherd children were minding their sheep in a field near a big rock. Suddenly the sound of sobbing silenced the children and their attention was riveted by the sight of a supremely beautiful woman holding a baby, standing aloft the big rock and weeping so much her tears wet the rock. After the lady and her baby vanished from sight, the children talked eagerly. They were mystified, not having been raised to venerate Our Lady, for these young children had been raised to be strict Calvinists. Calvin taught his followers that the Virgin Mary was an idol and that venerating her through the use of holy images was heresy. This led to the violent mutilation of statues and images, which Erasmus witnessed in Holland: 'whatever would burn was thrown into the fire, and the rest pounded into fragments'.
The village of Siluva had once had a remarkably rich Catholic heritage. Petras Giegaudas, who had a special love of Our Lady, spearheaded the building of the church in Siluva, dedicating it to the Nativity of the Virgin Mary and arranging for the land to be given to the Catholic Church. From Rome he fetched an exquisite icon of Our Lady holding the Christ Child and installed it in the sanctuary of the church in Siluva. Beauty begets beauty and the beautiful vestments and chalices used for the liturgy in the church sat well alongside the beautiful painting Petras brought from Rome. People came from all over Lithuania and from neighbouring nations to venerate it, and Siluva became a sacred site of pilgrimage.

On the cusp of the nation becoming Calvinist, a plucky priest, Fr John Holubka made an iron chest into which he placed the beloved icon of Our Lady as well as vestments, chalices and the legal deeds to the church property. Sealing the box, he buried it deep in the ground. He did this just in time, for soon the church was levelled. Eighty years later, the little shepherd children were playing on the exact spot where the church had once been. That first time Our Lady appeared she said not one word to them and one of the boys ran to the Calvinist pastor, telling him of the vision of the weeping woman, but was told he was giving voice to a mendacious fantasy. 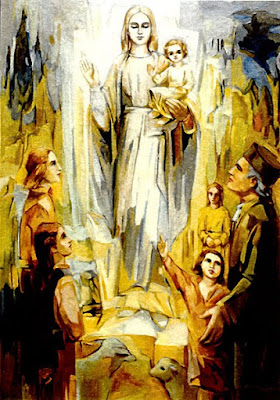 The other children told their parents who in turn rushed to the rock. The sceptical pastor joined them. When they were gathered there, Our Lady came into their midst. She was weeping and holding the Christ Child. She said, “There was a time when my beloved Son was worshiped by my people on this very spot. But now they have given this sacred soil over to the ploughman and the tiller and to the animals for grazing.” Our Lady referred to the Catholics - and not the Calvinists - as “my people” and yet she appeared and spoke to the Calvinists. The substance of Our Lady's message to them undercut the basis of their new religion, and yet they did not deny her words but reported them. 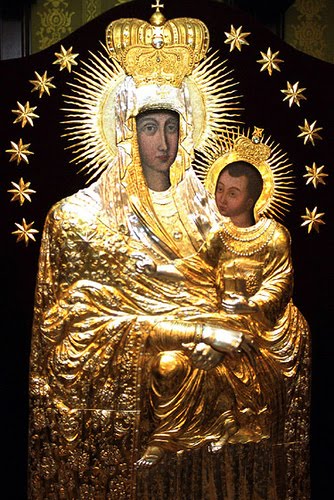 News of the apparitions reached a blind man who was 100 years old. All his life he had kept it a secret that he lent a hand to Fr John to bury the ironclad treasure chest when he was a young man of 20. Now he asked to be led to the spot where Our Lady had appeared. Once there his sight was miraculously restored and he identified the place. The chest was excavated. When the deed to the land was rescued the sacred soil was returned to Catholic ownership, a new church was built where the beloved icon was re-installed. Pilgrimages began and once again people flocked to behold the timeless beauty of the icon. Lithuanians started to return to the Faith, and today 77 percent are Catholic.

In 2008 on the 400th anniversary of Our Lady appearing at Siluva, Pope Benedict sent Cardinal Meisner to Siluva for the celebrations. Before his death, one year ago this summer, Cardinal Meisner had been one of the four red-caps to sign the dubia which invited Pope Francis to clarify Amoris Laetitia. I believe Cardinal Meisner was sent to Siluva because he had given the best years of his life to leading the small Catholic community in East Germany, a predominantly Protestant place, and Our Lady's role in restoring Lithuania to Catholicism would hearten Meisner that a country can return from Protestantism to Catholicism.