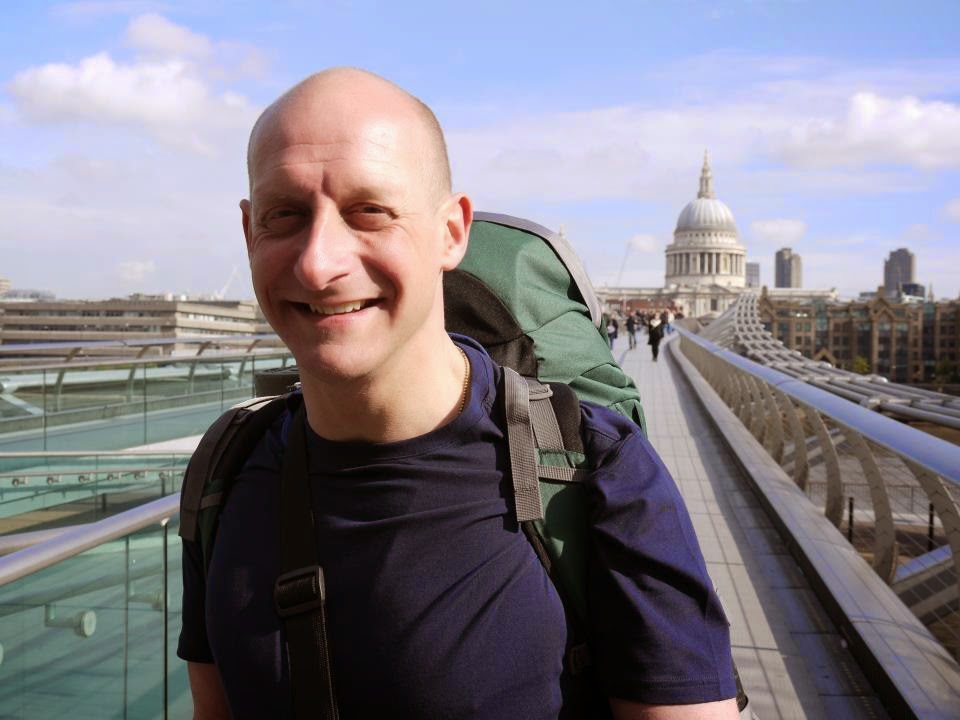 A big reason that Harry Bucknall walked the pilgrimage to Rome down the ancient Via Francigena was because of the age-old promise that you make up for your past sins by doing it.  ‘I’ve led a wild existence. There isn’t much that I haven’t experienced in life!’ Bucknall exclaims in his vivacious way.

But the pilgrimage is not for wimps. The 1,411 mile journey traditionally begins in Canterbury. From the Kent countryside, you make your way through France, Switzerland, and then through Italy, until reaching St Peter’s Basilica in Rome.

I am deeply curious as to why anyone would want to do such a pilgrimage. Shedding some light on the peccadilloes that he hoped to atone for, Bucknall says, ‘I’ve been a party animal. I’ve had a past with lots of drinking and lots of hedonism.’

The Via Francigena is one of the most physically demanding pilgrimages on earth. Did he know what he was getting himself into?  ‘I started out from a point of naivety. I thought this would be a jolly jape, that it would be a nice outing through the Kent countryside and then onto France.’ When did he realise how hard it was going to be? ‘It wasn’t until I was nearly 300 miles into the pilgrimage. It was at Laon, that I broke down, and wondered if I could go on. But I persevered.’

He documented his travels in his riveting book, Like a Tramp, Like a Pilgrim. Bucknall recounts his many adventures, the friends that he makes along the way, and the many times where he feels the helping hand of an angel or saint.

But merely thinking about grueling pilgrimages make me squeamish - I had a beloved uncle who died shortly after walking the Way of St James. That said, the Via Francigena is twice as long as the Way of St James.  Not to mention that it entails relying on the kindness of strangers to give you a bed for the night or a free meal.

When I talk to Bucknall, a dapper man in his 40s, who is the quintessential English gent, I want to go further into his reasons for doing the pilgrimage.  So, I ask Bucknall as to the unique personal benefit the pilgrimage held for him.  ‘The truth is that I did the pilgrimage to expunge a very low period in my life.’

‘Before starting the Via Francigena, I had just come out of a very bad, verbally violent and at times physically abusive relationship.  It was a most foolish time when I elected stupidly and irrationally to go out with another man twenty years my junior. It was full of jealousies, and one felt unworthy because one couldn’t compete,’ Bucknall discloses with admirable honesty.

Not content to blame his ex-boyfriend, Bucknall concedes, ‘an abusive relationship takes two.  It’s not that he was a bad man, but we were bad to each other.’

This need for a cleansing pilgrimage caused him to leave his job, his flat and his family and friends behind in England, in order to trek through  Europe with a rosary and crucifix around his neck.  It was a time of making peace with his past, ‘that relationship was a disaster, and I was largely atoning for my behaviour during that time. I have to take responsibility for my part in the relationship,’ he says humbly.

The relationship had been over by six months before he started the Via Francigena. That said, Bucknall dealt with some unfinished business on the way. ‘When I started the pilgrimage, my ex-boyfriend would send me text messages.  He wanted to get back together with me.  When I would not agree, he sent extremely abusive texts.’

There was also lingering regret, ‘When I was in the abusive relationship, I felt I had let my family down and upset them. It was a very public relationship, and I had been relying too much on some of my friends for emotional support.’ 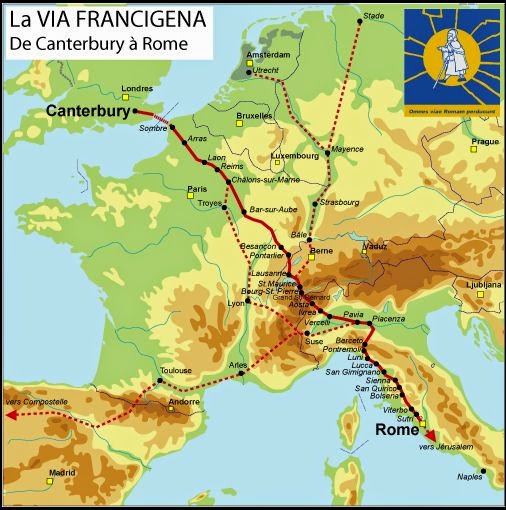 Bucknall had been walking for hundreds of miles ‘before I really got the relationship with the much younger man out of my system’.
It was at the St Bernard Pass in Switzerland that a change came over Bucknall,  ‘when I was staying in the monastery of St Bernard, there is a certain joy that I had arrived at the high point of a journey.  And I aligned my will to forgive my ex-boyfriend and to forgive myself. I came to terms with my past.’

But the book is not about being gay. Bucknall is frank that, ‘my sexuality does not define my life or my writing. Some people use their sexuality as a weapon of leverage. I don’t. I just happen to be Christian, gay and a writer.’

Like a Pilgrim, Like a Tramp is about a genuine quest to find holiness.  It’s not spiritual fluff either, Bucknall contextualises it, ‘admittedly there are an abundance of sickening articles in the mainstream press about being ‘spiritual’,’ he snorts a laugh, ‘but my book is about actual encounters with the angels and saints, as well as meeting wonderful people who put their trust in God.’

Bucknall has gained an appreciation for the mighty St Michael.  But the book starts with a thank you to a lesser known saint, St Spyridon of Corfu. Bucknall says that he is a firm believer in the intercession of St Spyridon. Some years before walking the Via Francigena, Bucknall fell off a cliff in Paxos, but called on St Spyridon and escaped certain death.

On the Via Francigena, Bucknall  met a fascinating cast of characters, who have rock-solid faith. One of them, a young woman, Sylviane is confined to a wheelchair, and told him that she may have lost the use of her legs, but that God was her guide. She even crossed the Alps before Bucknall did.

Bucknall’s book is largely a very timely celebration of Europe’s Catholic riches.  Yet, Bucknall is not Roman Catholic.  He says unabashedly, ‘I love Catholics!  All my closest friends are Catholic.  Half of my nine God-children are Catholic.’

So, is he about to swim the Tiber? ‘Well, I am a proud Anglican!’ he exclaims.  ‘I got very close to becoming Catholic during 2001. But then I was confronted with the paedophilia scandals and I couldn’t face coming in.’  In his book Bucknall hints that paedophile priests must get more public punishment.  Brief reference is made to this in Like a Pilgrim, Like a Tramp. When he reaches the cathedral of Piacenza, Bucknall saw a cage mounted on the side of the cathedral bell tower.  In the old days, errant priests were put there for up to a year, and fed on bread and water. In his book, Bucknall suggests that he thinks the cage would be useful in these times!

It seems a shame to be so scandalised by the sexual abuse crisis that he misses out on full Communion.  I mean, if he has such admiration for the true Church, then why has he not joined us?  ‘I toy a lot with becoming a Catholic,’ he admits.

Many people think that the Church has a problem with gay people.  Is that an issue for him?  ‘No, it’s not an issue. The fact that I’m gay has nothing to do with the reason that I’ve not become Catholic. I think Pope Francis has got the balance right in being so open to gay people, but in opposing gay marriage.’

But he is unyielding that, ‘my roots are everything to me.  I would never betray my Anglican background.’  Roots?  I remind him that we were all Catholic once upon a time. He agrees, ‘oh, yes, we were all Catholic, before us Protestants left the Catholic fold and set up on our own.’

This leads us to having a spirited debate about his use of the word, ‘Christianity’ in the following sentence: ‘Such was the fervour for Christianity in France during the Middle Ages that there were roughly 200 people to every church built.’

I raise a quibble here, asking Bucknall, if instead of crediting ‘Christianity’ with this flourishing of church building, he should have attributed it to Catholicism?  He relents, ‘alright, Christianity was Catholicism.  There was no difference. Protestantism did not exist at that time.  In my book, when I describe the amazing Catholic churches, I mean to tell people that everyone can worship in them, even a Protestant like me.’

I did this interview with Harry Bucknall for the  8th of August print edition of The Catholic Herald.

You may buy Harry's immensely entertaining and life-affirming book on Amazon.

Keep up to date with Harry's travels on the Facebook page. 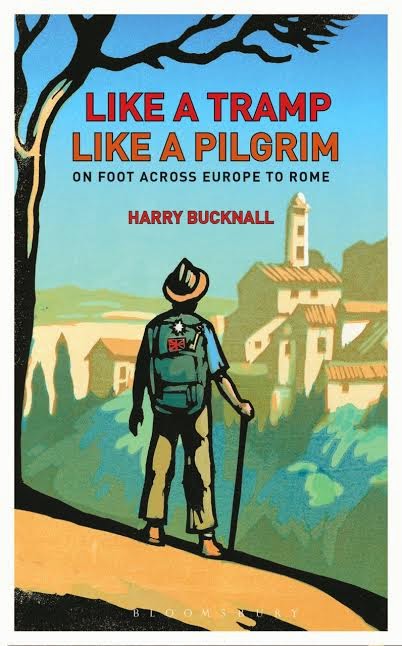