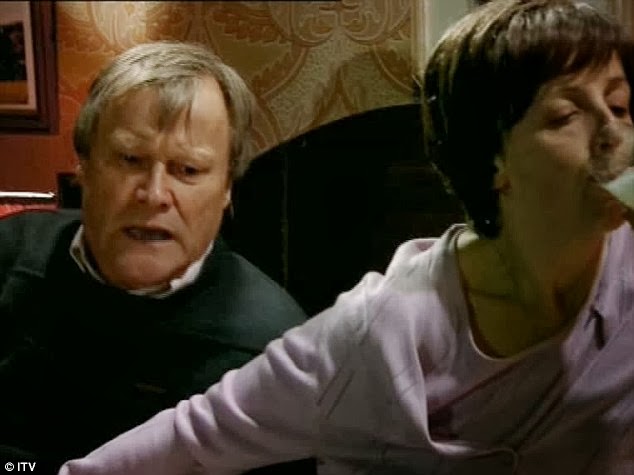 It’s been a morbid week in British TV.  The ITV soap opera, Coronation Street featured the ultimate act of self-destruction. Hayley Cropper, the transgender wife of Roy, had been battling pancreatic cancer. Hayley feared that the painkillers for cancer would affect her mental faculties, and instead committed suicide by gulping down a cloudy-white cocktail of lethal drugs.

I used to watch Coronation Street as a child, but unexpectedly, I gave up watching it after Roy and Hayley became a couple. I felt that they were both characters in their own right, more powerful on their own than together. Roy had been this very bookish, rather emasculated fellow who had a nerd’s sixth sense for detail. When he started in the café, he insisted on letting the cups drip-dry, as opposed to drying them with a t-towel because, "drip-dry is more hygienic".  He helped a kid on the street with their maths homework, and was so scholarly that he unnerved the cocky entrepreneur Mike Baldwin.

In 15 years, he’s gone from helping kids with schoolwork – to lying on the marriage bed while his wife used poison to destroy her life essence.

Hayley and Roy’s pairing was always a contrived one, but it held the viewers’ attention:  would arch conservative Roy stay with Hayley? And would she have the patience to bear with him? When they met, Hayley had the ordeal of explaining to naïve Roy that she would be having surgery to become a woman. Roy panicked at first - but he learned to love her for herself – or so we thought.

Last Monday night’s Corrie may have pulled in an extra 2 million viewers, but I think viewers will soon leave the street. Even if you agree with the actress who played Hayley, Julie Hesmondhalgh that assisted suicide should be legalised, and think it’s "a simple thing", you have to admit that the storylines are falling apart. Roy and Hayley’s union was an implausible romance that ended in the most unromantic way possible.

The fact that he did not stop her from killing herself leaves a permanent doubt in the viewers’ mind as to his depth of feeling for her.  If you love someone, you do not wish to hasten their demise, but want as much time as possible with them. It seems a cliché, but whenever I meet someone who has lost a loved one, they lament, ‘if only I had had one more day…’

Not only is Hayley's suicide in the worst possible taste – but it has also ruined 15 years of scriptwriting.

Had Hayley truly trusted in Roy, surely she would not have been overwhelmed by fear that the side-effects of the painkillers for pancreatic cancer would addle her with confusion? Is it not the point of a marital union that one spouse catches the other when they fall? In sickness and health and all that?

On the subject of surgery and painkillers…  When Hayley first walked onto the street, she was full of talk of becoming her "true" self by having surgery that would make her a woman. Now, if she was able to endure the anaesthesia and bottles of painkillers that her surgery entailed… Why was she so daunted by the painkillers for cancer?

The writers on Corrie may have to learn that the viewers will not trust their weak storylines. Trust, like the soul, once it’s gone to God, does not return.

I can offer an antidote, if you’ll pardon my use of the antonym for poison.  In the 80’s there was a being-tempted-to-suicide storyline in Golden Girls.  The episode was Not Another Monday, penned by Gail Parent. Spunky Sophia is caught completely off guard by her friend Martha who wants to die at her own hand as opposed to ‘dying by inches’ because of her angina and high blood pressure. Of all the episodes in the entire seven seasons of Golden Girls, this is Sophia’s finest hour.