Cardinal O’Malley urges Ireland to stand up to abortion lobby 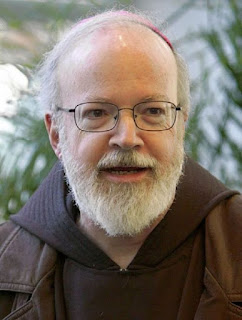 Cardinal Seán O’Malley has urged Ireland to stand up to the “great pressure” it faces to legislate on abortion, saying it should be proud of its pro-life heritage.

His comments came as Irish MPs prepared to vote on legislation that would allow abortion in cases where the mother is deemed at risk of suicide.

The government claims that the legislation will merely provide “legal clarity” for doctors and codify a Supreme Court ruling that allowed abortion in such cases anyway.
But the country’s bishops’ conference have described the proposal as a “dramatic and morally unacceptable change to Irish law” that would “make the direct and intentional killing of unborn children lawful in Ireland”.

In an exclusive interview with Mary O’Regan in this week’s Catholic Herald Cardinal O’Malley said that changing the law would “encourage” and “condone” abortion.

Cardinal O’Malley said: “Abortion is the taking of an innocent human life; everyone should resist abortion. Ireland has the good fortune, in part thanks to Catholic sensibilities, that her people have been opposed to abortion despite the great pressure that they have come under from secularising forces.”

He continued: “Ireland should be very proud of its pro-life heritage and how traditionally there has been great importance given to human life. Every life counts, and I am very proud that in Ireland protection is given to life that is as vulnerable as the unborn. I hope that Ireland will continue to stand up against the pressures – I know the pressures are there. Pressure to legislate for abortion is a dehumanising force in our world.”

The cardinal, asked if the change in the law would make such a difference as many Irish women travel to Britain for an abortion, said: “The laws have a function of teaching what is right and wrong. And simply because someone is going to do something, does not mean that we have to facilitate it, condone it, or encourage it.”

The Irish bishops’ conference last week condemned the idea that abortion could be a remedy for suicidal depression.

Its statement said: “It is a tragic moment for Irish society when we regard the deliberate destruction of a completely innocent person as an acceptable response to the threat of the preventable death of another person.”

Cardinal O’Malley meanwhile said: “If any woman is suicidal, she must be given treatment for depression. If she has an abortion, there are greater chances that she will be depressed and suicidal as a result of having had an abortion.”

The cardinal also said the Church should do more to promote adoption. “I am realising how negative the attitude is towards adoption… When a woman is in a difficult pregnancy, she sees adoption as a continuation of her problems… We need to change that attitude, because otherwise we will never be able to counter abortion,” he said.