Why We Saved Sex for Marriage Part One


PATRICK and THERESE McCRYSTAL gave The Irish Times their reasons.
What was your attitude to sex before marriage?

Patrick : “Growing up, my mum instilled in us that pre-marital sexual activity before marriage would deeply offend God. This was a strong enough motivation in all my relationships at university and afterwards to maintain my purity, so that I could save myself as an unspoiled gift to who would be my future wife – whoever she would be!” 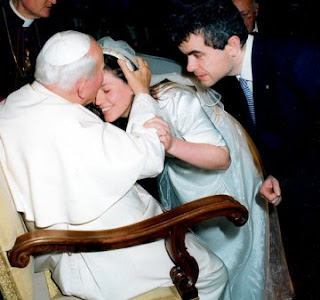 Therese : “I made the decision at a reasonably early age, about 13, that I would not ruin my virginity before marriage. I was neither a prude nor naive, as I had two sisters both conceive babies as teenagers. The heartache it caused the whole family probably helped strengthen my resolve.
My parents were nothing less than heroic in their support of my sisters and that taught me a lot too. I was a virgin on my wedding day and so was my spouse. In fact, most of our friends present were too, so it’s not as unusual as you might have thought.”
How do you think this has impacted on subsequent married life?
Patrick : “Waiting until marriage has meant we were free to give ourselves freely to one another and what a gift this was!
“My friends who did sleep with others before marriage tell me that there was a discontent sowed in their hearts towards their wives, because they had all these other experiences to compare her with. I am truly glad I waited and would fully recommend it to every young person.”
Therese : “The biggest impact is I trust my husband and I know he respects me. Our decision to marry was not based on physical involvement or emotional dependency.
“We were, of course, attracted to each other but just had clearer heads than if we had been sexually active. It also meant it didn’t take too long to figure out if this was ‘the one’ or not. Ten years on he’s still the one!
“Marriage was, for me, automatically associated with children. The two were one in my mind.”
Do you see any changes in Irish society in relation to this issue?
Patrick : “The marital act is the exclusive gift of husband and wife to one another. The unrestrained promotion of contraception has caused a desecration of the marital act, and its widespread abuse.
“Couples who refrain from sexual activity before marriage are just going to be happier. We see this from even all our friends and people we know.”
Therese : “Not too long ago Ireland was great talking about God and sex was a taboo subject.
“Today, the media would have you believe that sex is the god and God (particularly anything to do with Catholic beliefs) is now the taboo.”
Email Post
Labels: contraception crisis pregnancy marriage Patrick McCrystal saving sex for marriage The Irish Times Therese McCrystal