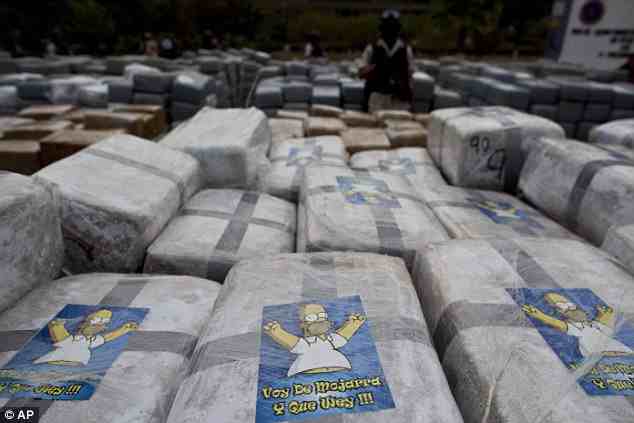 During this past week, an Irish newspaper (not on-line) invited me to ponder whether or not Homer et al are Catholics. Here are some light-hearted, off-the-cuff reflections.
Homer Simpson’s had a full week – posters of him decorated giant parcels of drugs seized in Mexico. The posters had the caption ‘I’m going to get high, dude!’ And L’Osservatore Romano proclaimed Homer (and Bart) to be ‘true’ Catholics.
Some infuriated Catholics stayed up all night writing on the internet to complain that Homer is not Catholic! Their beef is how a Vatican newspaper can even suggest that Homer – the beer bellied, blathering buffoon with an IQ of 2 is one of us! But steady on! Homer isn’t the devil incarnate. 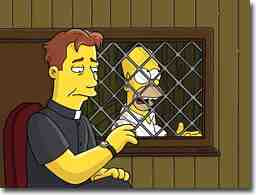 Are the Vatican journalists tripping on too much vino or is there any truth to support that Homer and Bart are Catholics? During one 2005 episode, Bart had a Catholic awakening after meeting the sugary-sweet Fr Sean, who was voiced by Irish actor Liam Neeson. Bart was drawn by the Catholic comic books, puh-please, the boy who is anything but innocent is drawn by comics? Homer is enticed to become a Catholic by pancakes and bingo. As usual – Homer is lured by food, not faith. Homer then spends hours confessing millions of sins to Fr. Sean. The wife Marge is terrified by all this because she doesn’t like the Catholic ban on contraception and is worried that she will go to Protestant Heaven while Homer will go to Catholic Heaven. Marge enlists the help of the Protestant Reverend Lovejoy, and together they kidnap Bart and Homer while they are getting instruction First Holy Communion.

But Bart wasn't quite altar boy material, having once said to Marge ‘Mom, can we go Catholic so we can get Communion wafers and booze?’ No wonder the Vatican newspaper previously praised The Simpsons for showing ‘the spiritual confusion of our times’! There’s more hope for Homer since he made such an honest confession. But Homer endlessly humiliates supercilious, scrupulously sola scriptura Ned… Cartoon character Ned Flanders is thought to be the best known TV Christian of all time and foremost among his fans is the Anglican Archbishop of Canterbury, Rowan Williams! This is one reason why the Vatican acknowledged The Simpsons major influence – most ordinary people are more likely to know the life details of Ned than they are to know their own neighbours.
But according to the Vatican newspaper, Homer keeps his Catholicism secret. I’m not convinced of Homer’s closet Catholicism. There was the time Homer decided to become a Christian missionary in the South Pacific and was put on a plane with water coolers of holy water. When Homer arrives he opens a casino which he calls “The Lucky Savage.” Soon all the natives are miniature Homers; they gulp down beer, gamble and throw punches. Homer feels remorse for ruining the native’s unspoiled and moral way of life and in penance he builds a chapel. Unfortunately, Homer rings the chapel bell too loudly and starts an earthquake.

But would Homer make an devout Catholic? The fact that he divorced Marge so that he could re-marry her would count against him. Homer in a bid to make a quick buck became was an internet ordained minister and opened a gay wedding chapel in his garage. The devil previously took Homer to court demanding Homer’s soul. Homer had previously promised the devil his soul in exchange for a doughnut. Really, Homer needs an exorcist.
But Homer’s ‘conversion’ to Catholicism isn’t meant to be serious. Nothing on The Simpsons is ever serious! The Simpsons are puppets that takeoff all aspects of society. They are a lippy and political version of The Muppets. It’s not that we’re meant to imitate The Simpsons – Homer and family are too busy imitating and ridiculing us. Homer represents the fast food lifestyle, while Bart and his ‘eat my shorts’ back-chat is the rude, crude and proudly brash boy of today. Some years ago, I did an English essay for uni where I compared some sober, severe Victorian characters with the boisterous and bratty Bart. I got high marks/a good grade (rare for me…) because the person marking my essay said he had never understood the Victorian characters to be so austere and bleak before they were put against The Simpsons.
L'Osservatore Romano's report claiming that Homer is a Catholic was optimistic and a bit too hopeful! Because – brace yourselves – Homer et al are just pixels transformed into cartoons. They don’t have eternal souls and we may as well be arguing that Bugs Bunny and Daffy Duck are good Catholics. Real life Homers are, however welcome in the Catholic Church. But if anyone were to eat as many doughnuts and guzzle gallons of Duff they would hardly fit in a church door, never mind a confession box. D’oh!
Email Post
Labels: L'Osservatore Romano The Simpsons