Prior to 7/7/2007, how these invectives used to fill the air; ‘you have no right to go to a Latin Mass. That was banned!’ ‘It’s an act of disobedience to go to a Latin Mass, it’s only obedient to go to the Pope’s Mass, which is the English Mass.’ Or worse of all, ‘it’s actually a sin now to go to the Tridentine Mass.’  A minute before the Motu Proprio was announced anti-Latin Mass nonsense was thought to be valid intellectual speechifying. But that changed instantly with the Pope’s pronouncement that the Latin Mass was ‘never abrogated’; and ‘the love’ that young people in particular have for the Latin Mass was acknowledged.
The Motu Proprio was a groundbreaking, historical occasion – and put the kibosh on that ‘disobedience’ double-talk. 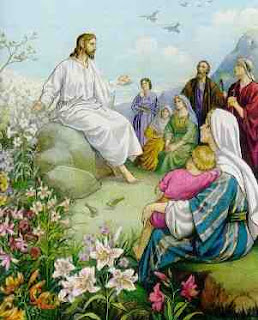 The Motu Proprio had a hugely positive influence on my teaching of the faith. The year after the Motu Proprio, I was teaching history to a bunch of ten year old boys. The Irish curriculum prescribed that they learn about life in 1950’s Ireland, when their grandparents were growing up and attending the Latin Mass. I simply gave the children a few facts, and a few ‘visual aids’ about the Latin Mass, and invited them to interview their grandparents about the Latin Mass. It really took off; their grandparents became extremely enthused about explaining the Old Mass, and the children became more competitive about whose gran/granda had told them the most about the Latin Mass. It also gave the children a real flavour of local culture; ‘my nan [grandmother] says to me the gir-erls weren’t allowed wear red nail polish or bright lipstick to Mass, and the fan-cay dresses they would wear dan-cay-ing were not allow-ed at the auld Mass eye-ther’
Never did the grandparents tell the children that the Mass had been ‘banned’. And one day I heard, ‘Miss O’Reee-gah-an, where d’ya get the auld Mass now? In America or someplace?’ I told them that there were more Masses being planned, that week, in their own town. 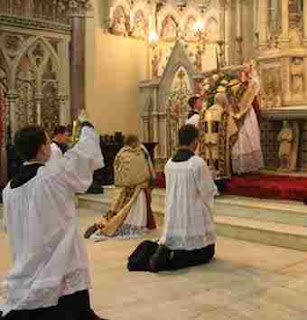