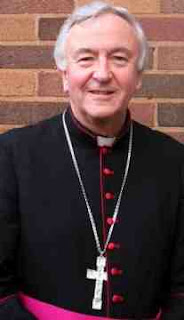 It was the moment everyone had secretly been hoping for; Liam O'Hara, a young Catholic said to Archbishop Vincent Nichols, ‘I’m questioning his [Gregory Pope] appointment as deputy director to the Catholic Education Service’, then Archbishop Nichols was invited to respond on what he thought of the dubious appointment of the Labour politician. We were seated in the large drawing room in St. Wilfred’s Hall where the monthly meeting for young Catholics is held by the London Oratory fathers. It was during the Q and A section of our archbishop’s talk. I was a tad confused by the Archbishop’s response, but then I’m on the dense side. I’d be interested to know what you make of this, ‘I didn’t know Mr. Pope until recent weeks, and I didn’t have anything directly to do with his appointment….I acknowledge and respect the reality of different political processes and realities…Gregory Pope really loves it that on ballot papers his name is down as Pope Gregory, he really loves that…’ Our archbishop was heard saying that Gregory Pope can’t be found ‘isolating aspects of his career’ and that it’s advised for politicians to vote for a reduction in the number of weeks that abortions can be performed. Hang on - isn’t that the reason that there was the furore about Mr. Pope’s appointment to the CES – the very fact that he voted against reducing the number of weeks that abortions may be done? Our archbishop continued with ‘let us be more careful about coming to quick conclusions based on voting records on single issues.’ Archbishop Nichols then said something about ‘absolute Catholic teaching’ not always corresponding with ‘absolute political realities’ and if we don’t participate we risk becoming ‘isolated’.

On the whole, Archbishop Nichols’ talk had been very encouraging, warm and interactive, and he was keen to have a long question and answer time. He answered many questions with kindliness and a deft humour. One young professional spoke that he felt slightly persecuted in his work place by ‘militant atheists’ and their harassing questions about the virgin birth. Our archbishop was candid, ‘tell them to get a life…ask them why they aren’t looking after their own life…if you want to appreciate the beauty of a stained glass window, you must go into a church.’ When replying to a young lady who enquired as to what he says to Catholics whose friends are making choices to have sex before marriage and IVF, Vincent Nichols said ‘it’s difficult for me not to be pious…they must stay your friends…you know in your heart of hearts that their choices are not always going to have happy consequences…they may even have tragic consequences and they’re going to need you.’
There was a question from someone who feels ‘scared’ about the pope’s visit, to which Vincent Nichols urged that ‘we must not be ruled by the negativity in the press…the pope can come and speak about issues beneath the radar…such as social cohesion’, and that there’s ‘nobody better than the pope’ to engage in a discussion on these issues. ‘It’s a government sponsored visit…it will mean recovery…and healing of an ancient wound in our history…’
Throughout the question time, Vincent Nichols moved more into the heart of the room, and that’s when he noticed my shaking hand at the back of the room. ‘Thank you so much for your talk, our pope has told us about the hermeneutic of continuity and with regard to the Motu Proprio of 2007, how do you see the greater facilitation of the Extraordinary Form, the Latin Mass happening?’ May have just been me, but there was a slight atmosphere change, and my question was re-phrased with the archbishop asking those who had heard about the Motu Proprio to put up their hands. Some said afterwards that asking the full-to-bursting room of young Catholics to put up their hands if they knew about a solemn papal document was ‘patronising’, that perhaps if those present had not heard about the pope’s Motu Proprio, it didn’t just mean that it was of less importance. Archbishop Vincent Nichols did respond to me directly however, and said that the Holy See had asked him to collect reflections on the first three years of the 2007 Motu Proprio. Vincent Nichols has written to parish priests and ascertained that there are ‘many priests who are willing to learn…but not great demand.’ He also added that 'a troubling aspect of the Motu Proprio is that...some think it's [ the Tridentine Mass] is the proper one...'


The varied questions asked to our archbishop came after a talk he gave entitled ‘Habits of the Heart’, where he spoke on prudence, ‘just because we can do it does it mean we should?’, courage; and gave the examples of courageousness including honest and ‘straight’ when talking to friends, fidelity in marriage and pursuing a vocation. Justice means accepting that ‘the rights of other people are more pressing than my own’, and temperance as Archbishop Nichol’s grandfather was fond of saying, ‘a man is rich according to the simplicity of his needs’.
All in all, I believe while there was disappointed regarding his liberal stance on Gregory Pope’s appointment, I consider Archbishop Nichols to be a well-spoken, and a spirited man of faith, he told us that ‘our eyes are opened with faith’, that ‘there’s a nobility within you that’s of God’ and encouraged us to 'put lots in the collection box for the pope’s visit'.
Email Post
Labels: Archbishop Vincent Nichols CES Gregory Pope militant atheists Pope Benedict's visit to Britain Tridentine Mass